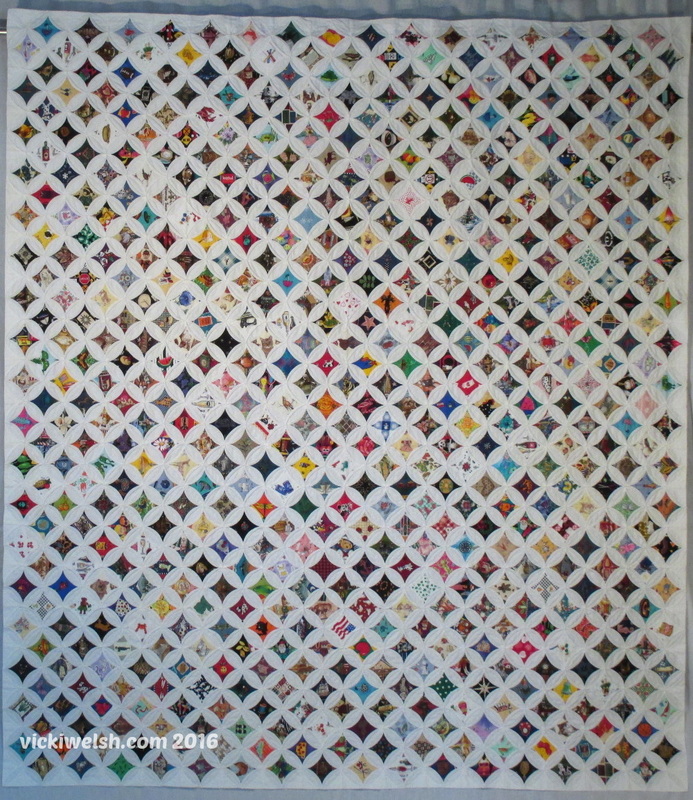 70 x 79
As we often do, this is another quilt that I started on a whim. I had visited my Grandmother through college and after and she was working on a king size Cathedral Window quilt. After the last visit I decided that it would be a great idea to make one for myself. I started the quilt in March 1999 and Gr-Ma Ottaway died the following December. This became my work travel project. I took it everywhere from London to Los Angeles. After 2001 my tiny scissors were confiscated at Heathrow airport. Once they even tried to take my tiny sewing needle. I argued that one and won so I was able to stitch on my flight home. 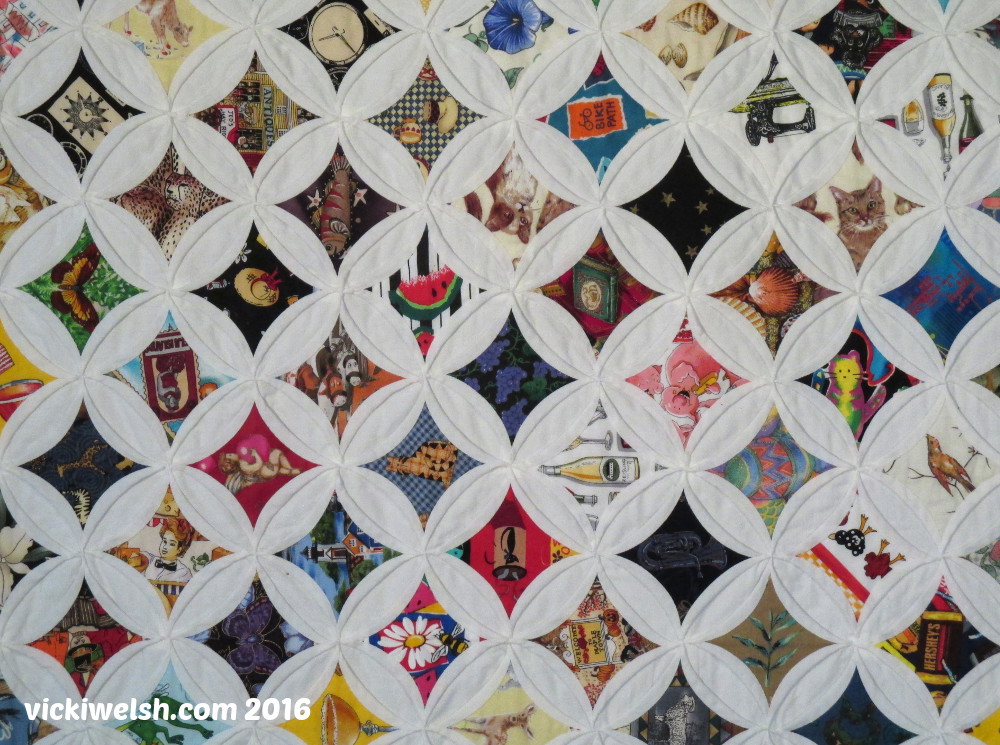 I suppose if there's a good bucket list project for a quilter this one counts. Here are some instructions for the traditional way to make one and it's the way that my G-Ma was making hers. I figured out a better way for me. All of the stitching of the white squares on mine is done my machine. 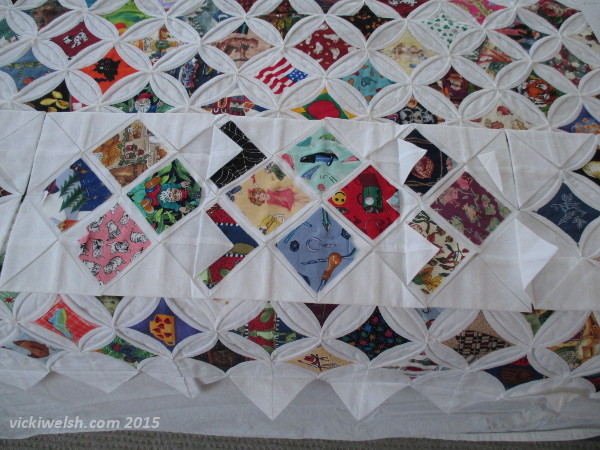 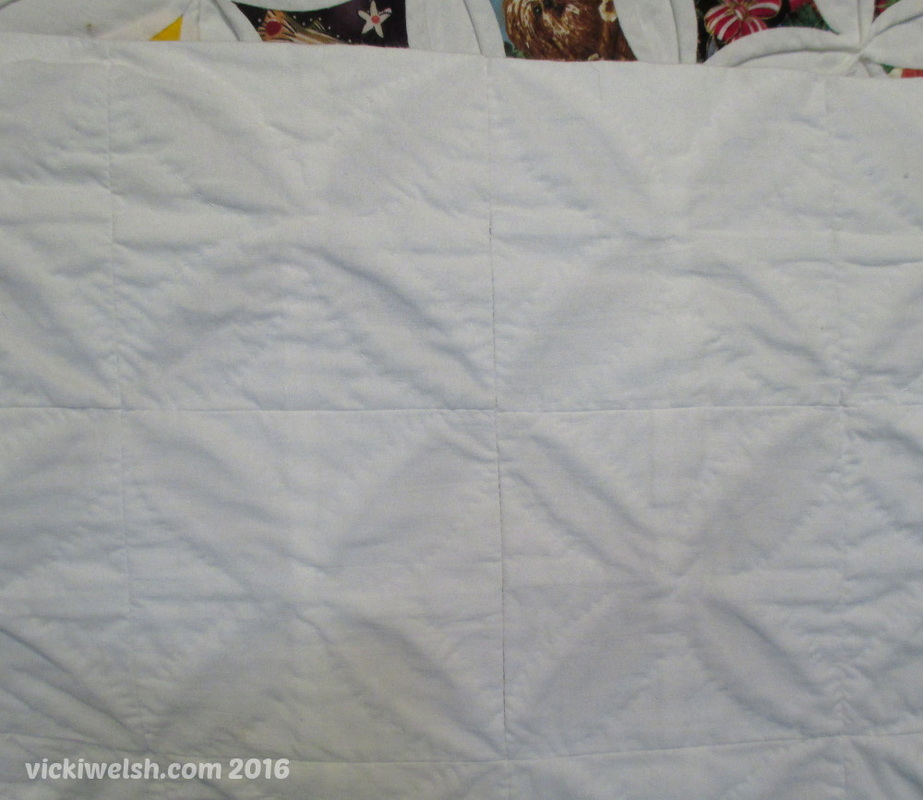 ​Here's the back where you can see the pillow squares sewn together and the hand stitching through all of the layers. It doesn't contain any batting and it doesn't need it. This is a heavy quilt! 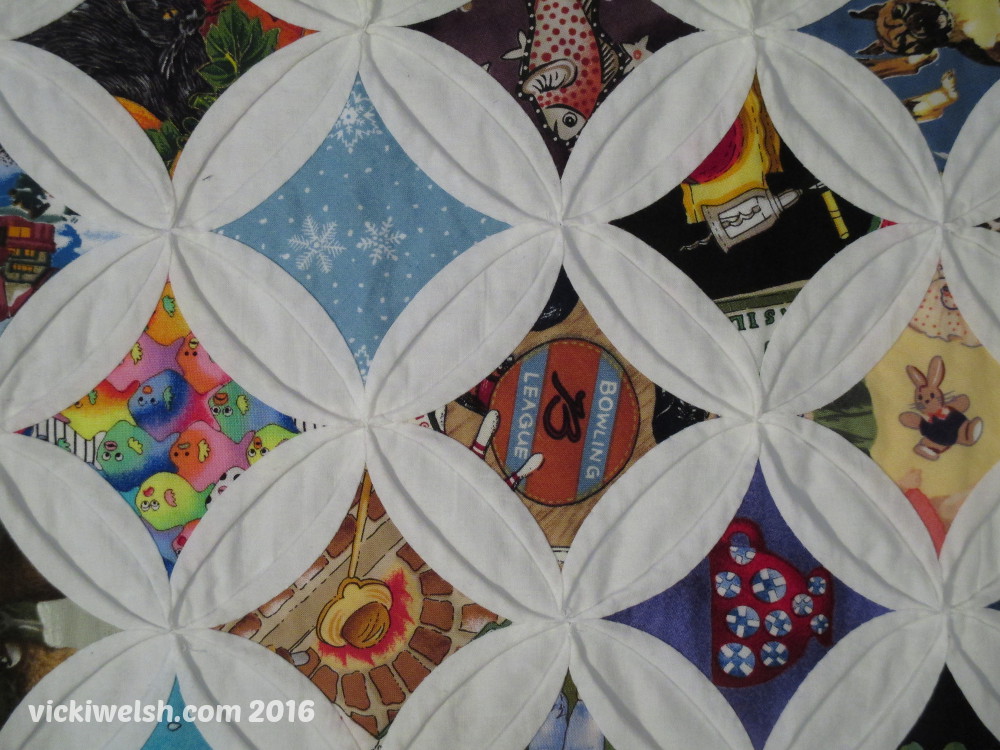 ​I did it as an I-Spy thinking that it would keep me interested. I think it will be less dated because of that. If I had chose colors 16 years ago I'm sure I'd hate the quilt now. I'm pretty sure that there are no duplicate images. There are multiple images from a single fabric but no duplicates. I can't even imagine how much I spent collecting fabric for this. Once I cut my squares from the novelty fabrics I rarely used the rest of it and gave away a big bin of all of the novelty fabrics a couple of years ago. 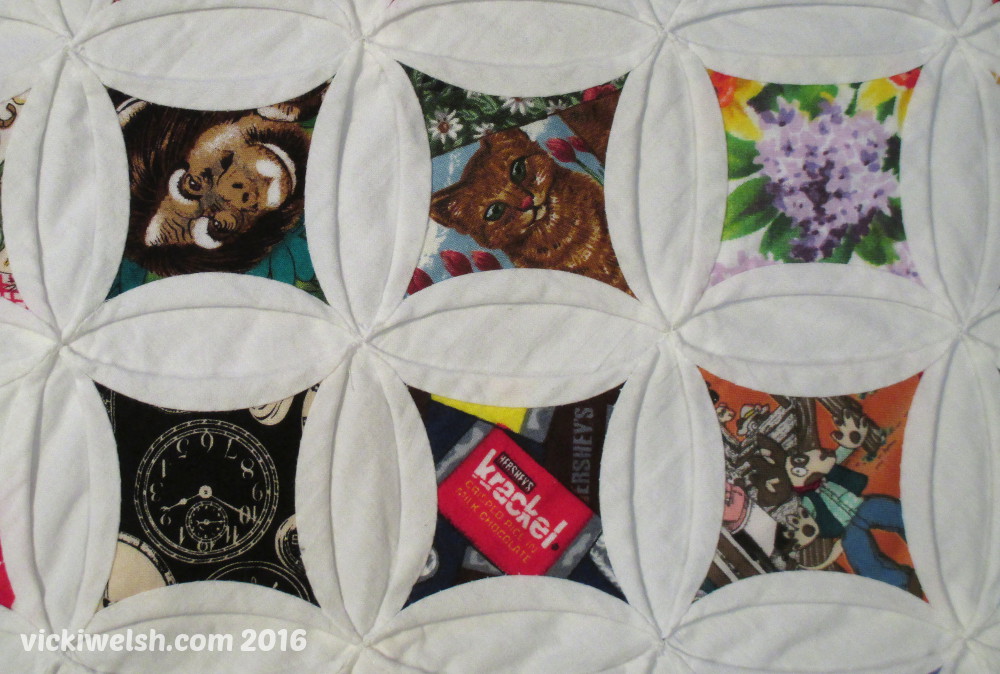 ​My G-ma never finished her quilt. After she died my uncle had all of the family members go through the house to get things that were meaningful to them. I'm the only crafter in the family so I got her sewing machine and sewing supplies. I still use a few of her sewing notions. Originally I wanted her Cathedral Window quilt but my uncle never found it. I did get the box if materials and supplies for the quilt but never did anything with them. Hers was done in muslin with calico prints. I think the colors were browns, oranges, golds and maybe some greens or blues. I don't exactly remember. No one was surprised that the quilt was missing. She had a habit of tossing things out. 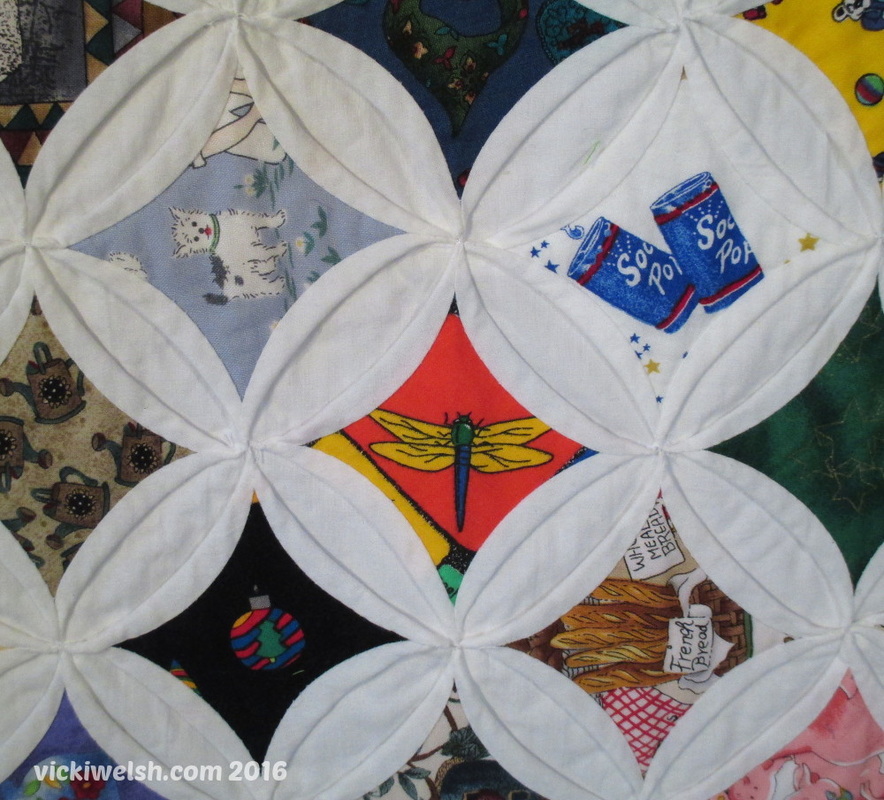 ​In 2003 the family was together and it was then that I learned that my youngest uncle had gotten a piece of furniture from G-Ma's house and the quilt was in there. I do remember mentioning that the quilt meant something to me and that I had looked for it. I thought he might offer it to me but instead he asked me and my Mom to finish it for him. We explained to him that he might not understand the time investment required to finish that quilt and we declined. It was one time that it was easy for me to say no! When I got home I mailed him instructions for making the quilt, instructions for how to store and care for the quilt and all the materials to finish it. In hindsight I am eternally grateful that he did not give me that quilt. One CW in a lifetime is enough!

​One thing that stymied me through the making of the quilt was figuring out what to do with the edges. If you Google "Cathedral Window quilt" you will have difficulty finding photos of the edge of a CW quilt. Many people tack the points and leave the flap open. Well, if you have followed me for more than a week you know that doing that would drive me insane. I considered adding half triangles of a solid, stuffing the flap with a little batting and about 20 other ideas. But there's nothing like the desire to "get it done" to streamline your decision making. All those other ideas would take a lot of time and I wasn't interested in investing more time than absolutely necessary so I curved the edges in and appliqued them down just like the little blocks. It's a good finish and I like it. 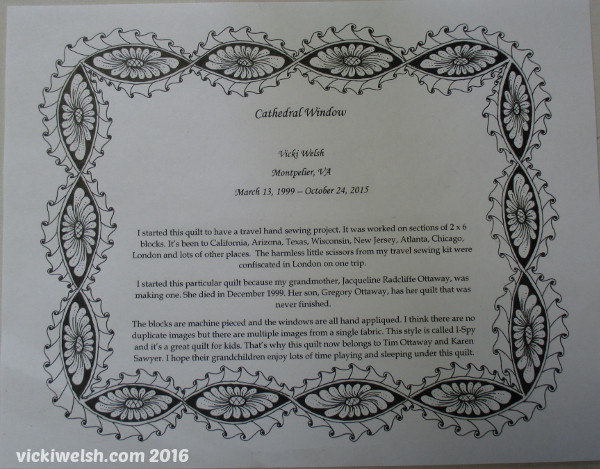 The label finishes it off. 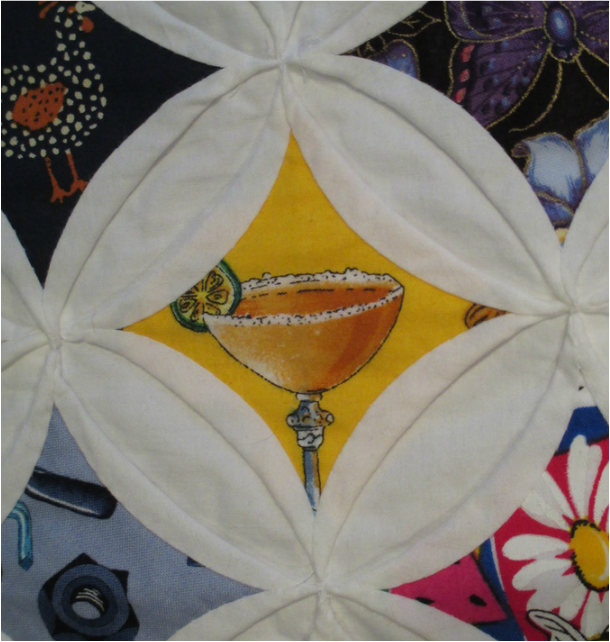 ​If you are thinking about making a Cathedral Window as one of your bucket list quilts be warned that it might drive you to this.