69 x 92
In 2013 Barbara Brackman ran a block of the week program and the theme was Grandmother’s Choice: Votes For Women. My friend, Becky, does block testing for Barbara and that’s really the only way that I knew about the program. I generally don’t participate in these but something about this one intrigued me enough to make 2 sets of blocks. One set was made with my shibori fabrics and the other was made with symmetry fabrics. I wanted to show how different the blocks could look by just changing the fabrics.
Once I had the blocks done I realized that I had created sets that perfectly represented each of my grandmothers. This one is for my maternal grandmother, Lura Rakes Dove from Galax and Fieldale, VA (1909 – 2004). 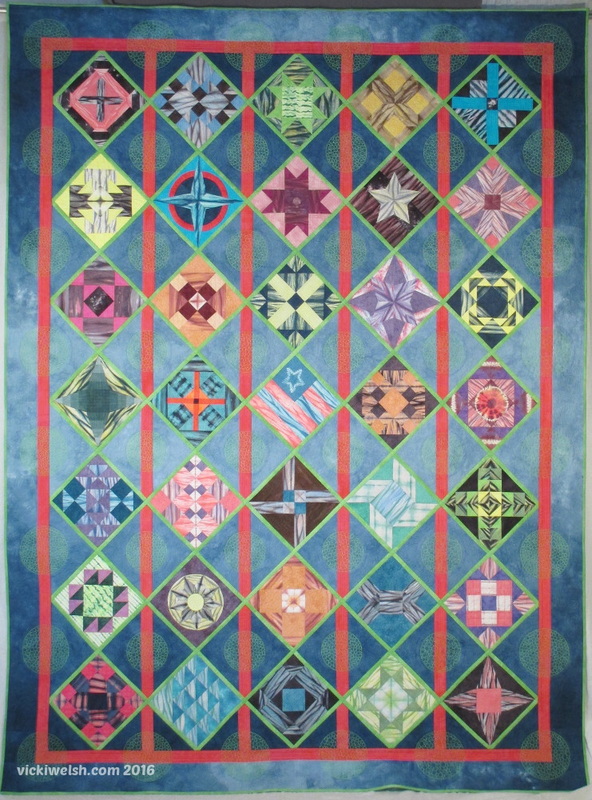 ​The setting for this quilt was inspired by the Grandmother’s Choice quilt made by Cheryl Kotecki. When she ordered the fabric for her quilt she shared her plan. With her permission I built off her design and used the Sea and Sky gradient for the background and custom dyed pink and lime for the sashing. 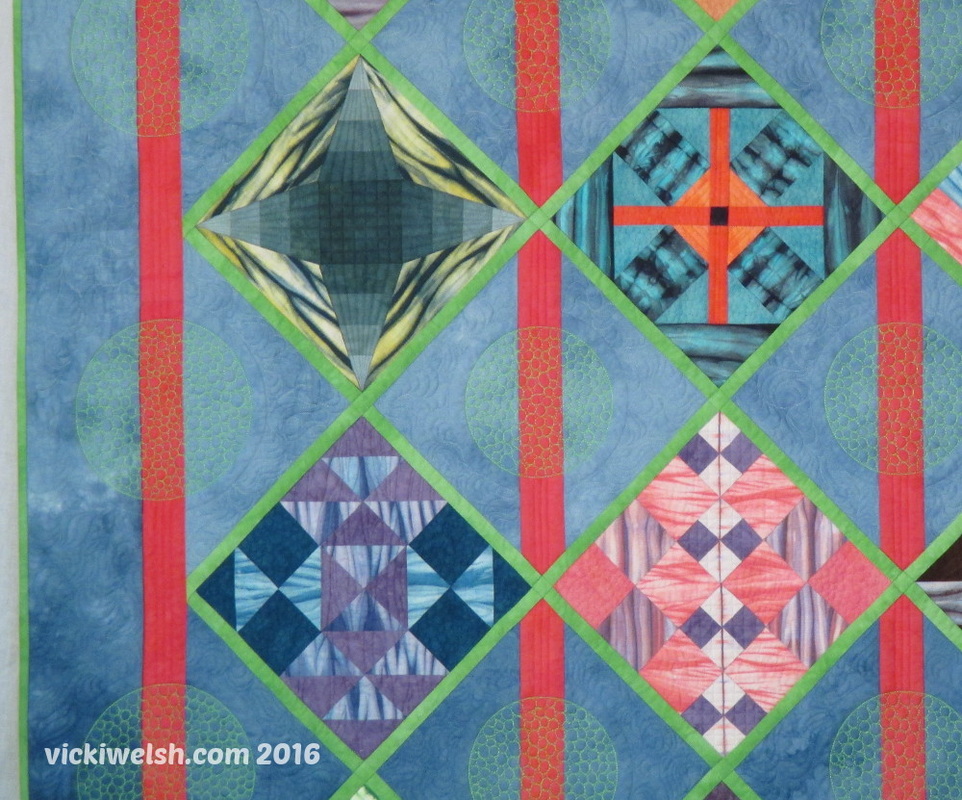 Making the blocks was a lot of fun and I was excited about the layout and then I loaded the quilt for quilting. That’s where everything slowed down. I get completely stymied when I start to quilt a quilt. I spent hours with transparencies and markers but eventually just broke it down in steps and started. I began quilting in May and started with stitch-in-the-ditch to stabilize the quilt. Miles and miles of SID.

Next I moved on to the shibori blocks. I used lots of pebbles for filler, lots of SID and I stitched the shibori fabrics following the color flow in the fabric. I am REALLY good a pebbles now. All of that quilting was done with Monopoly in the top and Bottom Line in the bobbin.

It’s the setting blocks where I froze. I just couldn’t decide what to do and almost took the quilt off to think about it. But I decided that I needed to stick with it and work through the creative block. Otherwise I’d continue to partially finish quilts.
I finally settled on the circles of green pebbles. It helped me carry the pebbles from the pieced blocks to the background and also repeat the green from the sashing. I also wanted an effect of the pink ribbon running over and under elements.


Notice that the green circles in the border blocks are larger than the circles in the setting blocks.  That kept the distance between the circles and the edge of the setting blocks about the same.
I felt that the background in the blue areas needed to be softer to counter all of the SID and pebbles. I created the unquilted circle around the pebbles as a reference to the width of the green sashing. I used 4 colors of blue thread so that the thread would not show against the fabric. On the back I used only light blue so watching tension was critical. My Innova made that easy.
​These are some of my favorite blocks. 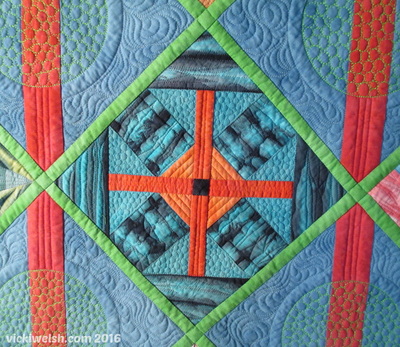 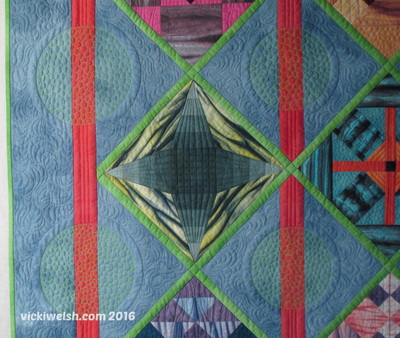 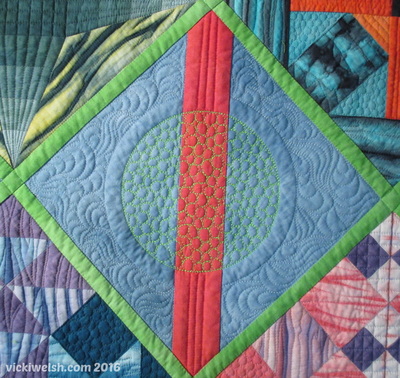 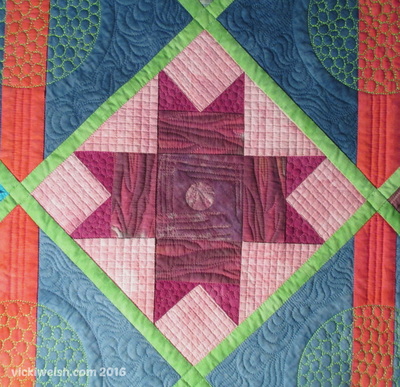 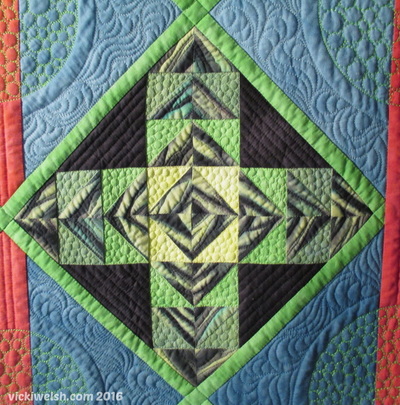 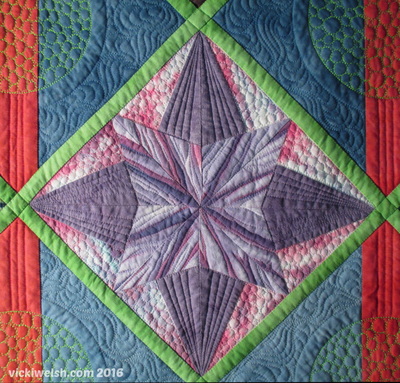 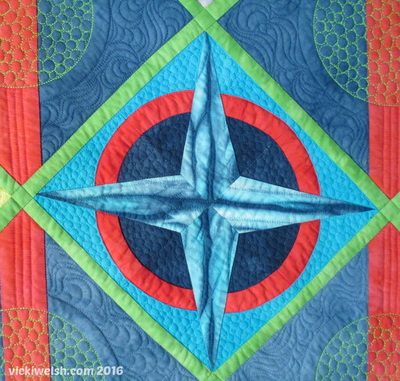 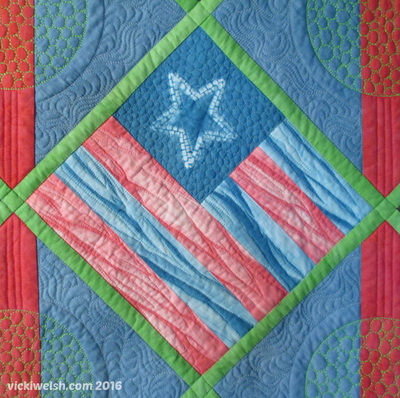 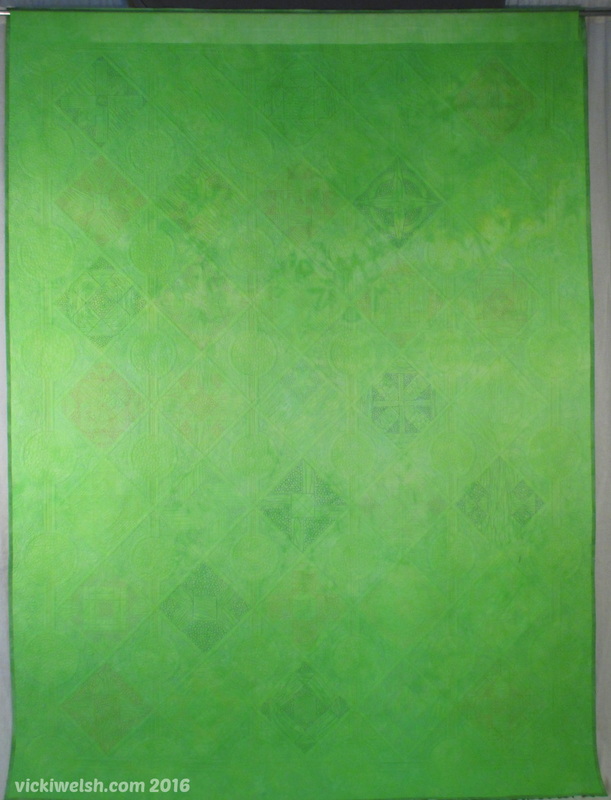 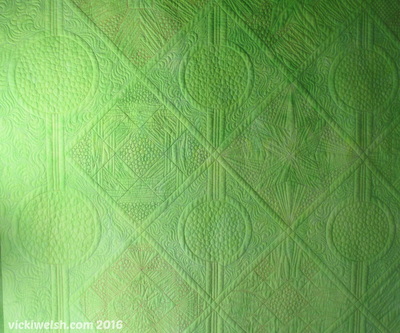 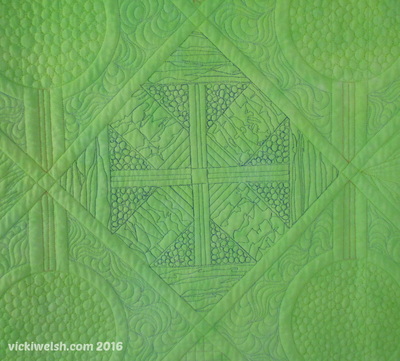 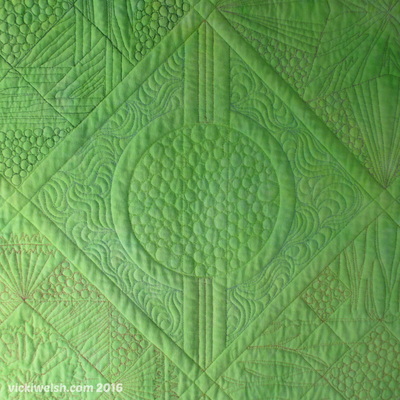 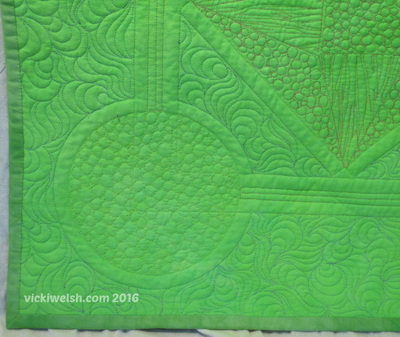 Here’s the back and you might be able to see the one decision that I regret. I love the lime green gradient effect but I’m not fond of the color threads.
All of the blocks on the front are stitched with Monopoly thread but I used a color on the back that was predominate in the block in case some of the thread would show on the front. That worked great for the individual blocks but I do not love the effect on the back. By the time I realized I didn’t like it, it was way too late to change. I do love the texture on the back though. 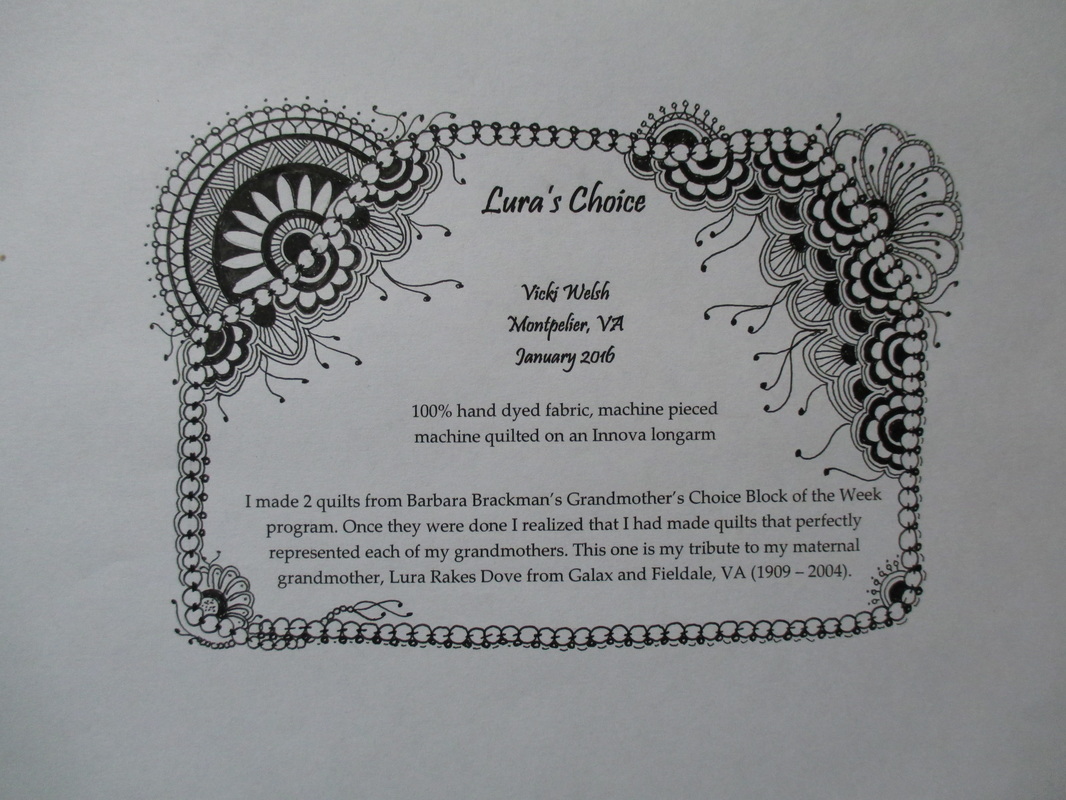 In the end I am thrilled with the quilt. There was a time when I thought I'd never be able to quilt something like this and now I know that I can do even better the next time. Quilting this quilt was better than attending 10 classes. My next "fancy" quilt will go faster and be better just because I made this one.
​This quilt won Best Use of Color in the Traditional category at the 2016 Mid-Atlantic Quilt Festival and Honorable mention at Machine Quilter's Showcase 2016.

My Grandma Dove never had a lot of money but she gave of herself to her grandchildren as much as she could. My brothers and I loved visiting her and Granddaddy.
Grandma was feisty and funny. My Granddaddy was a great Grandfather, maybe not as great a husband. He was very traditional in his opinions about women. He never let Lura drive or travel so the first thing she did after he died was buy a bright green Chevy Vega and learn to drive. She also started traveling. If anyone asked her to go anywhere she would pack her bag and be waiting on the rock wall next to her driveway.
She worked in the Fieldcrest factory hemming towels and was very proud that she could read. She loved reading movie and gossip magazines. She didn’t watch a lot of TV but she knew what all the stars were doing.  She was always in a dress and dressed very neatly. Her house was immaculate but she didn’t mind us messing with things when we visited. She never seemed to fret over things. She loved shoes and it was her one weakness. I think she had more shoes than clothes. She was extremely independent and mowed her own lawn until she just couldn’t physically do it anymore....in her 80's!
She could sew anything and I remember a green suit she made for me in high school or college. I made lots of my own clothes but that suit fit me perfectly. While I was in college she would send me stamps (because there was no internet or cell phones) and write me notes encouraging me to go out in the world and find myself and be independent and to not settle down too soon.  She was a very modern thinker where her Granddaughters were concerned.