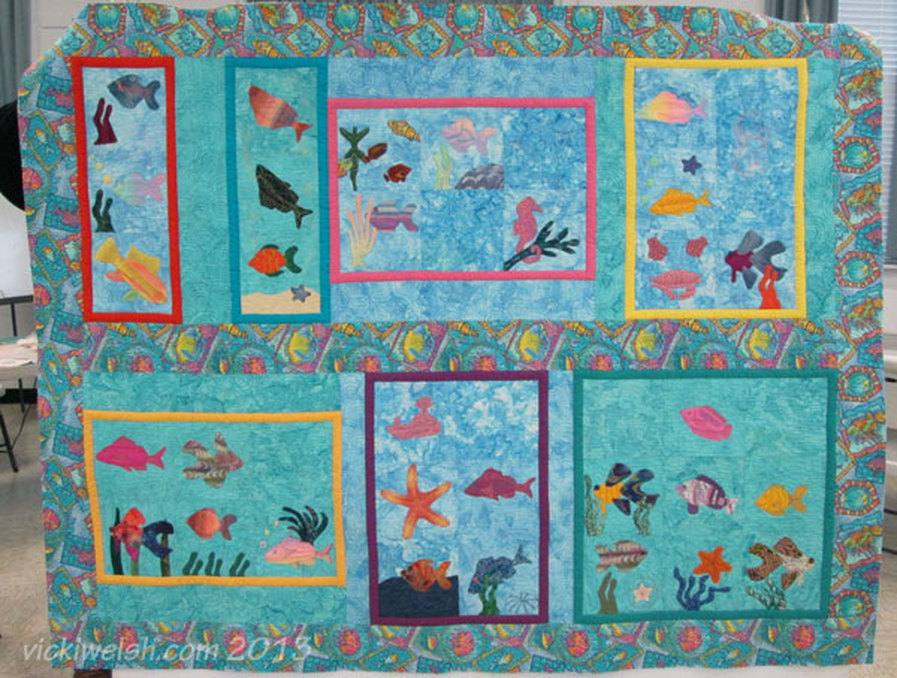 This WAS the oldest UFO in my house. Here's the story.
Sometime around 2000 (THIRTEEN years ago!) my club,  Country School Quilters, had a series of programs on applique. Three months in a row we had a lesson on a different method of applique. I know we did freezer paper and needle turn and I can't remember the 3rd one. At the end of the lesson we were given a square of batik fabric and a fish pattern and encouraged to applique a block and bring it to the next meeting.
Someone, and we don't remember who, put this quilt together and asked for a volunteer to quilt it. I had just gotten my Handiquilter (the very first one that was just a simple frame of metal pipes for my regular sewing machine) and I, stupidly, volunteered to quilt it. I think everyone expected that I would do some sort of overall quilting design.
I actually started the quilt and got half of the sashing quilted and I HATED it. I took it off the frame and ripped out all of the stitching. I realized that I was in over my head. Then I was traveling to London to work for 3 years and other stuff got prioritized over this quilt. On top of that, no one was asking for it. One person did once and I offered to give it to them to quilt and that was the last time it was mentioned!
I finally got tired of seeing it in the pile and made a goal to get it quilted this year. I put it on the frame in March and worked on it for an hour almost every day for 2 months. This is how I know that you can tolerate almost anything for an hour a day. The quilt was very overwhelming so I just tackled one thing at a time. I started by doing the SID around the frames to stabilize it. Then I picked out a quilting motif for the sashing and started that. Next I tackled the fish one at a time. By the time the fish were done I was ready to do some added motifs, the seaweed and waves. The fish that I added were done with the help of  Dover book.
It's no secret to anyone that I do not like this quilt. The sashing print fabric jars me. Many of the fish (including the ones I did) are not appliqued well, there's seaweed floating in the middle of a frame and there are upside-down fish. Additionally, this type of quilting is WELL beyond my skill level. But we don't learn unless we actually try. In the end I was helped by knowing that no one in my club cared what I did with this quilt. So I pulled out about a dozen thread colors and gave it my best shot. In the end, this quilt was great for me as a learning tool. It was better than any class that I could have taken. There are a lot of things I would change now but I know I made it better and I'm happy with that. CSQ members were happy with it too. This quilt now hangs permanently in the Ashland Library children's section. It looks like it was made specifically for the space.
Here are a few before and after shots of some specific fish to give you an idea of what I was working with. 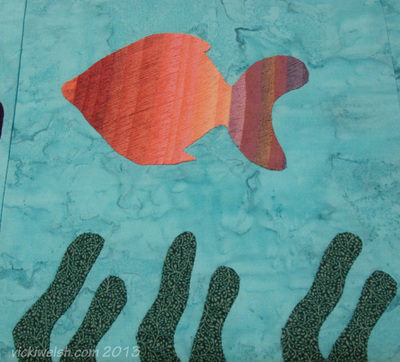 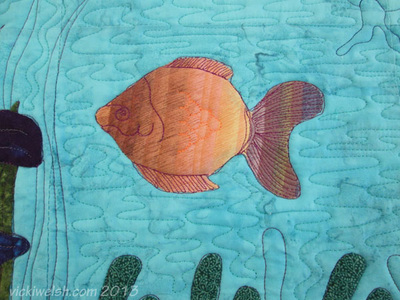 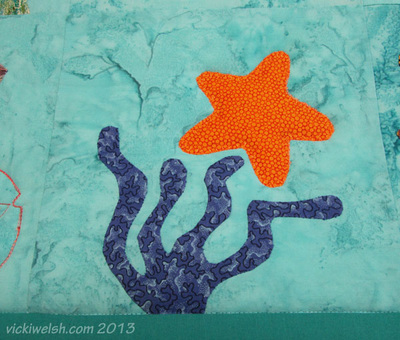 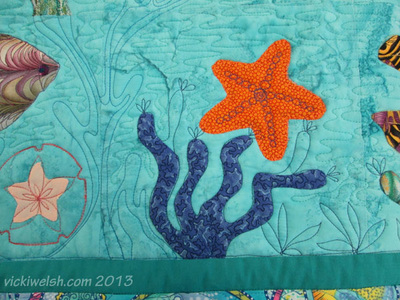 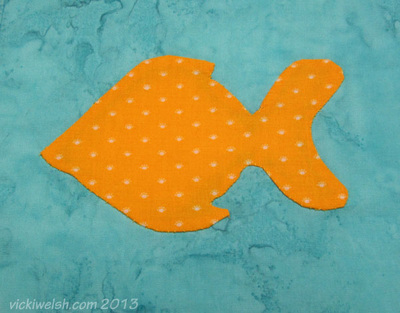 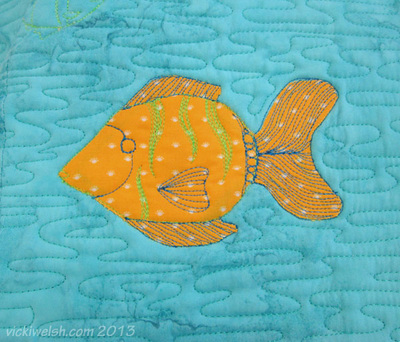 ​There are 7 panels on the quilt and I treated each one like a separate fish tank. Here are the 7 panels. Each panel has some sort of other creature added with just stitching. I also added seaweed and finished it off with water ripples. 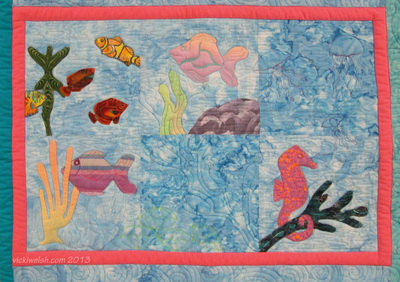 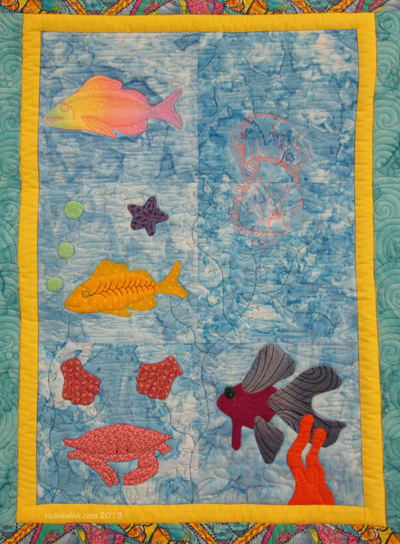 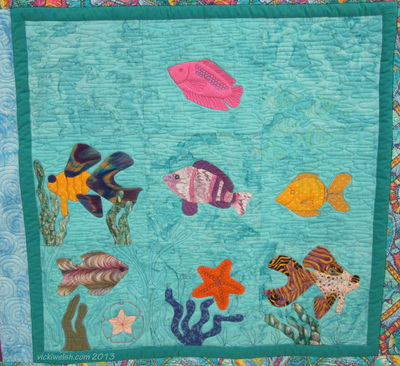 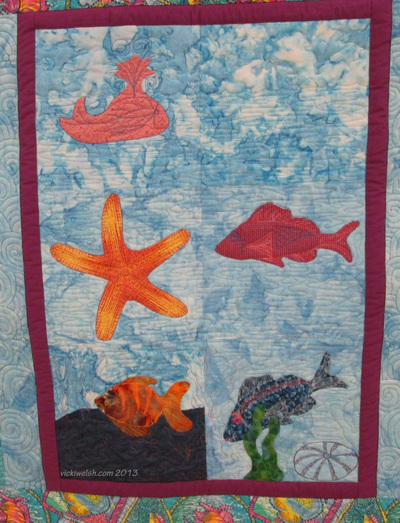 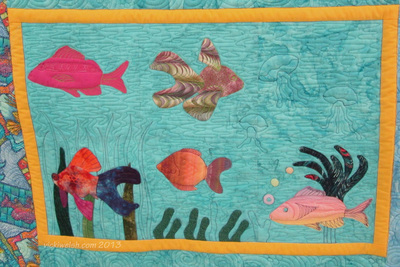 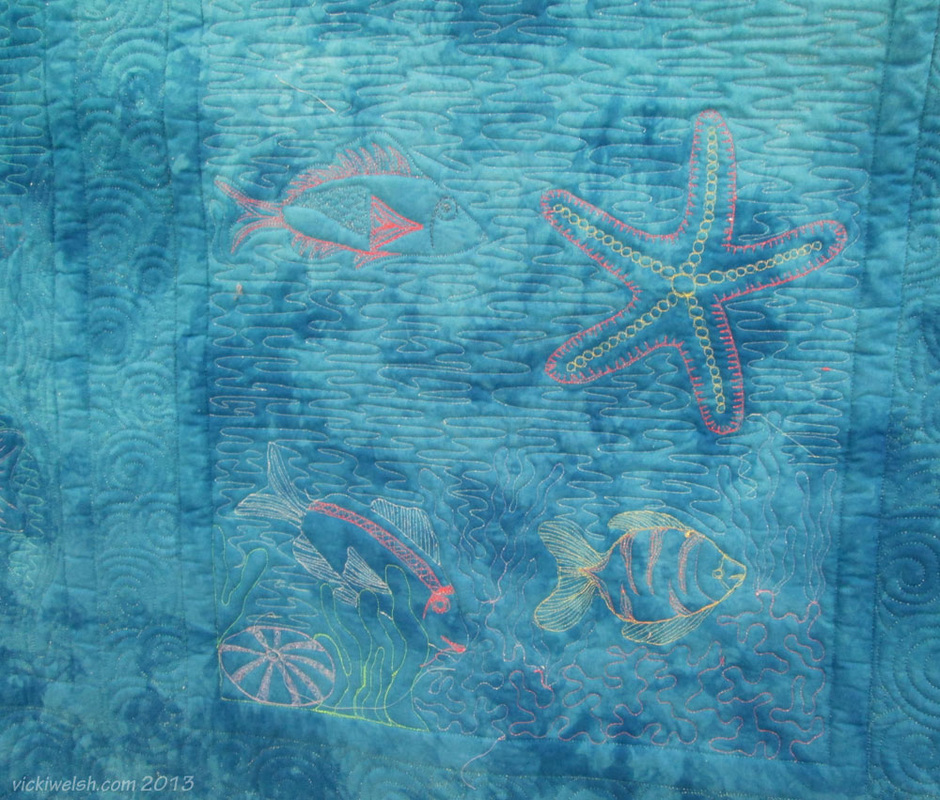 The back is hand dyed and I changed the bobbin thread every time I changed the top thread.
I am so grateful to Becky for binding it and Estelle for sewing a sleeve on it.
The next time I volunteer to quilt something I will make sure I have a plan and that it's a plan that I am capable of executing. That's the primary lesson that I learned here!